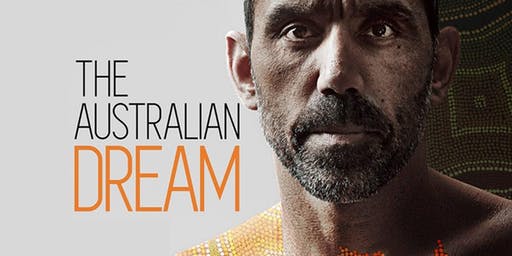 I’ve always found it hard to love Australia. On one hand it’s a place that has offered me so much – a peaceful upbringing, an affordable education and accessible healthcare, not to mention amazing friends, spectacular beaches and excellent soy piccolos. But I’ve always had a strong revulsion towards the place at the same time, which, paired with an acute guilt for feeling ungrateful, has made for a complicated relationship.

Adam Goodes is a former professional player of Australian rules football, a sport I won’t even try to describe not least because I am allergic to spectator sports. Goodes also happens to be an Aboriginal Australian. Goodes experienced racial vilification during his career in a very public and open manner, and this film explores his story and the conversations it led to in Australian mainstream culture.

The film is written by Stan Grant, who is is a well known Australian journalist and author who has spent years as an international correspondent. He is incredibly eloquent and I urge anyone who is interested to read his books. The film features insightful interviews with Grant, as well as other Australian personalities including sports journalist Tracy Holmes (also Grant’s wife), Olympic gold medalist Nova Peris, TV presenter Eddie McGuire and many more.

Some reviews have criticised the technical aspects of the documentary, but in my opinion it is successful in telling the story of Goodes and presenting a surprisingly varied range of voices on the topic. Though I winced through scenes featuring conservative commentator Andrew Bolt and TV personality and ‘larrikin’ Sam Newman, they represent a section (majority?!) of Australia that I remember all too well from living there.

Obviously I can only speak to my experience, but in my experience Australia is not a country that has a healthy relationship with its past. Though I grew up there, and attended high school and university in Melbourne and Sydney, I probably  know as much about the history of Indigenous Australians as someone who has never been there. No Aboriginal people attended my schools, and I never met an Aboriginal person until a few years ago in Mexico.

I always felt that this was wrong, messed up, but never really knew what to do about it. When I left Australia years ago in part I was leaving behind this dilemma, burying it out of sight, and looking elsewhere for belonging. It was too easy for me to write Australia off as an ignorant or racist place from a safe distance.

Although The Australian Dream is not a film about football, the fact that Adam Goodes is a footballer is significant. For mainstream Australia, sport is paramount, and what happened to Goodes forced many white Australians to face a reality that is generally avoided.

Throughout his ordeal Goodes remained extraordinarily dignified, and though his story is sad and unfair, his journey is incredibly inspiring. For me, it is the unfailing love of his country that is specifically inspiring. Here is a man who experienced rejection in such a uniquely public way, and instead of running away or denouncing his country he instead doubled down on his belief in improving it. I can learn from this.

My Australia was an extremely suburban and sheltered one, one where our Prime Minister refused to say sorry and a very narrow version of white Australia dominated mainstream media. In subsequent visits I have been exposed to a different side of Australia, things seem to be slowly improving and conversations about the country’s history seem to be happening more openly. Attending the Invasion Day rally in Melbourne this year, surrounded by a youthful and multicultural crowd and hearing Aboriginal people tell their stories, was a deeply moving and heartening experience.

Watching this film helped me realise how useless my guilt is, that acknowledgement and education is a healthier approach to reconciliation than burying my head in the sand and rejecting the country wholesale.

Inspired by The Australian Dream, I’ve enrolled in an Open University Indigenous Studies unit and I am determined to educate myself on the realities of Australia’s past and present. Bad and good. The documentary is after all remarkably optimistic. Although The Australian Dream was not a high performer in the Australian box office it has received critical acclaim, and there is a campaign to have it shown in schools. Which would be amazing. Meanwhile, however, I would urge everyone to watch the film as I think it gives good insight in what makes Australia tick, beyond the beaches and the barbies.